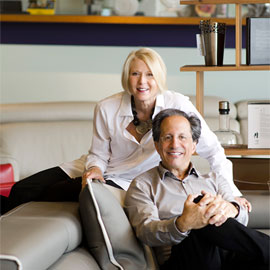 Perry and Lora are the smiling faces behind PerLora. We already know some fun facts about them, but we asked Perry a few questions to dig deeper!

Keep reading to find out where he hails from, what he did before starting a very successful furniture store – PerLora, and what inspires him. Next month, we’ll be getting to know Lora a bit better, so stay tuned!

Perry Sigesmund grew up in the small Ohio Milltown of Steubenville with furniture-loving parents. No wonder he founded PerLora with his other half. Growing up surrounded by a mix of antiques and contemporary items, furniture and design are in his very DNA.

While his background is in traditional furnishings, PerLora is very much a contemporary store; Perry says he has always gravitated towards contemporary furniture, which especially made sense when diving headlong into the Pittsburgh furniture market in the 1990s.

During college, Perry managed a clothing company, further inspiring his love for high design.  Upon graduation, Perry worked at his father’s furniture shop. Soon after, he decided to open his own store in Steubenville, while living in Pittsburgh, which ultimately proved to be a tiring commute.

With a successful design firm in Upper St. Clair and a growing love for contemporary furniture, Perry knew it was time to start making big changes toward what would ultimately become PerLora.

The furniture industry has always been a keystone in Perry’s relationship with Lora. In fact, their first date was at the annual furniture market in High Point, NC. Perry ‘heard through the grapevine’ that Lora would be there, and the rest, as he would say, is history.

He also retells the story of finding what would become the home of PerLora: after dinner (and a pitcher of sangria from Mallorca), the two took a stroll down East Carson Street, where they noticed a gracious but boarded-up building.

The building had been through many reincarnations before this fateful night, but when Perry saw it, he turned and said to Lora “This is it!”  to which Lora replied, “This is what?” When Perry responded “Our furniture store!”, history was made.

A True Story Of Success in Furniture Industry

When first opening in Pittsburgh, Perry said that it was a very traditional town. “In the beginning, it was a shock. We had to educate the public.” And educate it PerLora did. Contemporary home furnishings is a category that continues to grow, and Perry knows that PerLora remains an integral cornerstone of a mostly traditional city.

He says that everyone wants something different, which is one reason why PerLora continues to work so well. Coupled with PerLora Leather in the Strip District and the PerLora LOFT adjacent to the main store, PerLora has everything, from high-end contemporary to a younger, loft-style vibe, with all of your favorite leather pieces in between; one-stop shopping!

Perry’s secret to success is in always exceeding one’s expectations; “If you think about that every day, you survive the ups and downs of the industry”. That, and his talented and educated team. He emphasizes that PerLora is full of creativity, from its interior designers to the office manager, and that this is one of the best parts of opening the doors every day.

For his own inspiration, Perry turns to Milo Baughman, a modern furniture designer, famous for his longtime collaboration with Thayer Coggin. “Everything he has done” influences Perry. That shows through at the Southside showroom, where there are always a number of Milo’s pieces handy.

Another piece that Perry adores is the Luxe from American Leather, reminiscent of the Art Deco movement, with crisp, tailored tufting highlighted by buttons, emphasizing the geometric forms of the arms and back. Stunning!

At PerLora, with pieces ranging from the modern historic to the contemporary. And with Perry in the house, design, and style always go hand in hand!

Experience the comfort of efficiently designed furniture without sacrificing style.